Zurich Insurance is a multi-line insurer that provides insurance for individuals, small businesses, mid- and large-sized companies, and multinationals. They are Switzerland’s largest insurer and also operate in over 215 countries and territories.

Zurich’s account fraud team aims to create positive customer experiences by processing claims as quickly as possible. At the same time, they must prevent insurance claims fraud from slipping through the cracks. This means they have to work fast.

Fraudulent insurance claims can come in many forms. A fraudster might file a claim for a car accident that did not actually happen. Or they might claim damage from a hail storm when no storm actually occurred. Fraudsters may work individually or in organized networks.

Automation helps by flagging the potentially suspicious insurance claims cases among the mass of claims Zurich receives. But while automated detection is an asset in sorting through claims to identify the ones requiring the attention of the fraud team, it also produces a mass of alerts. The new challenge for the SIU team in Switzerland became deciding which cases truly appeared to be fraud, requiring further investigation, and which were merely false positives.

Case triage involved looking at data that had been collected manually in different source systems. It simply wasn’t efficient, and their existing tools didn’t help them see the big picture since there was no way to see the connections between the data.

The 25 members of the SIU also found themselves in a race against time. “Sometimes we have only minutes to react to a claim,” says Paul Kühne, Head of the Special Investigation Unit at Zurich Insurance Switzerland. Customers expect their claims to be processed without delay after submitting them online, so the team needs to make the right decision as quickly as possible. Having an efficient way to weed out false positives would also save time for investigators to spend on truly suspicious insurance claims cases.

The stakes are high on making the right call, since preserving a good customer experience is paramount for Zurich. “It’s hard to make an investigation against a customer. It’s hard to explain to honest customers why we are asking so many questions and why we need more time to process their claim,” says Paul Kühne.

The account fraud team needed a solution to add to their existing toolkit to help them see the big picture and make better informed decisions on their alerts while accelerating the decision-making process.

The solution: using the power of graph visualization and analytics for insurance claims fraud prevention

To gain precious time and inform their decisions, the team decided to implement Linkurious Enterprise graph visualization and analytics software combined with Neo4j’s graph database. The graph visualization solution also lets you see the connections between your data: a major asset in detecting networks of fraudsters and complex insurance claims fraud schemes. 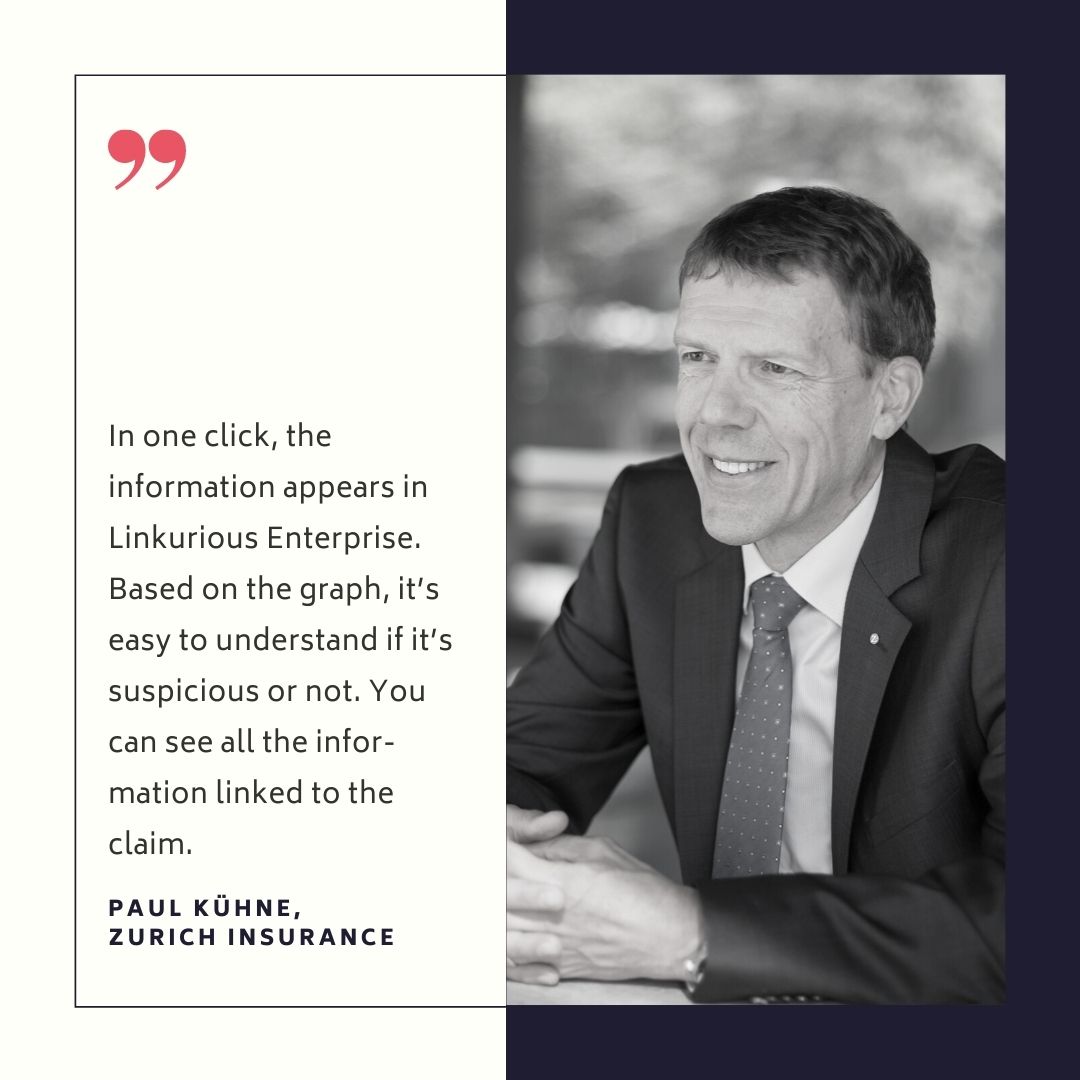 Accessing all the information in one place enables SIU managers to explore the case in just a few clicks, and to understand everything and everyone connected to it. Zurich relies on data from several sources including internal data, public data, national databases of known fraudsters and of car insurance claims, etc. Linkurious Enterprise empowers the team to see the information they need without having to manually search through these multiple sources. They are now also able to easily see and intuitively explore the connections within that data.

An added advantage for Zurich has been their close cooperation with Linkurious. “Linkurious takes our feedback and works with it to make changes to the product. That’s a benefit to us,” says Paul Kühne.

A launchpad for insurance claims investigation

Linkurious Enterprise fits smoothly into the Zurich Insurance Switzerland workflow, working alongside their existing tech stack. Once a claim from a customer comes in, the fraud detection system calculates the fraud score in real time. Suspicious cases are displayed in the case management system. From there, in a click, SIU managers have access to all the data and information related to the case in Linkurious Enterprise. If they find the case suspicious and worthy of investigation, the SIU managers assign the case to a field investigator.

Linkurious graph visualizations are a jumping point for Zurich investigators, helping them develop an investigation strategy. Based on these visualizations, they are able to understand what information is missing, who needs to be interviewed, which people are important for the investigation, etc.

One of the major benefits of using Linkurious Enterprise for Zuric Insurance Switzerland h is that it empowers them to make informed decisions quickly. “Collecting different information from different sources manually takes a lot of time,” says Paul Kühne. With Linkurious Enterprise, “triage is faster and more efficient.”

Each of the 25 members of the SIU team handles 10 to 15 cases per day. Prior to adopting Linkurious Enterprise, Zurich investigators spent between 20 and 30 minutes on case triage. Now they are able to reduce triage time by an average of 30 percent, saving 5 to 10 minutes per case.

Quick triage of cases cuts down on time spent on false positives, optimizing their workdays to dedicate more time on cases of real insurance claims fraud.

In our webinar, hear directly from Zurich Insurance Switzerland how they manage their anti-fraud workflows. Watch it now to see a demo of how they handle cases from alerts, to alerts triage, to investigation.